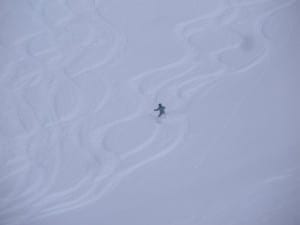 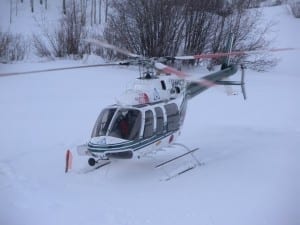 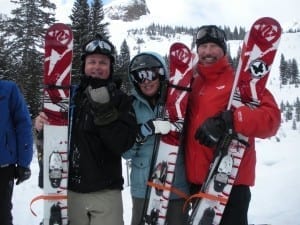 A few years ago we went on a skiing adventure in Telluride, Colorado, my brother, husband a group of our friends. It was my first trip to the high mountain ski town, even though I’ve lived relatively close by (at least by Colorado standards– less than 4 hours) for 26 years. But I’ve heard so much about the beauty of the mountains there, the cool town, the legendary skiing, etc., that I was not surprised by any of that. Rich and I had a fabulous time along with my brother, Wallace; we skied our legs off and made the most of the Telluride après ski scene.

We arrived just in time to settle into our slope-side accommodations, turn on the Superbowl and root the Saints to victory. For the second half, we walked a couple blocks to a local hamburger joint to watch the rest of the game, enjoying the game and the ads with the four other guys on our trip, yucking it up as we downed the tasty burgers. We hit the hay early in anticipation of helicopter skiing the next day. 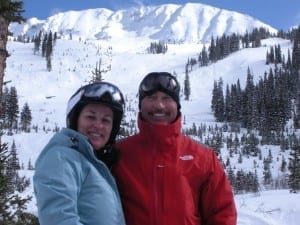 Since it had been snowing for a few days, it was uncertain if we’d actually be able to fly on Monday. Since the pilot is totally reliant on visual flight to negotiate the tricky high-altitude landing zones, even partly cloudy skies can cancel the flight. We got up early to check in with the Helitrax office and they thought it was a go—the skies were clear at 7:00a. Our group of eight (two women, six men)met in the hotel’s breakfast room, choked down some bagels and headed up the mountain, all decked out for skiing powder. It’s a 15 minute gondola ride from the town up to the mountain village and we were at the Helitrax headquarters by eight.

We signed our lives away then listened to the guide’s orientation speech. By then, the clouds were resting heavily on the peaks and after waiting an hour to see if they would clear, the day’s flight was cancelled—it snowed hard all day. Disappointed, we headed back down the gondola to change to all-mountain skis, instead of the huge “Pontoons” that we ski on powder (see picture). While the K2 powder skis are incredible in the deep stuff, making it effortless to float and turn, for the moguls and tracked snow that we would be skiing in-bounds, they are not ideal.

Our group reunited at the very top of the ski area and preceded to ski hard for several hours. Steep terrain was the order of the day and in Telluride, there’s no shortage of that. There was fresh snow in abundance, although with the late start, it was mostly tracked up. It was the most mogul runs I’ve skied in a while; the pillows of soft snow on top of the bumps was fun (the bullet-proof hard layer in between was not). I definitively got my cardio going and could barely stand up at the end of the day. We skied some steep faces with great snow and also ended up on some rocky goat trails (that’s actually how the ski area described them!). It was late afternoon before we got down to the village to eat lunch and again we discovered a local pub with awesome food and cold beer.

After the hot-tub and dinner on the mountain, it was time to ice my knee and get horizontal. I needed a good night’s sleep if I could last a second day at the ski area, let alone on the helicopter. We had hopes that the weather would allow us to fly on Tuesday; unfortunately the delay had dwindled our group to five. After several days of not flying, Helitrax’s wait list had essentially doubled, so it was questionable if there would be room for everyone that wanted a seat.

Tuesday morning, again the skies were clear early, but by the time we made it up the mountain to the Helitrax headquarters, the clouds were gathering around the peaks. The pilot called an hour delay to reassess the weather and we had a moment of déjà vu—maybe helicopter skiing wasn’t in our cards. Then suddenly we had the all-clear to fly and we were scrambling to the bathroom, strapping on avalanche beacons, donning our skis and heading down to the landing zone at the ski area.

The pilot gave us a bone-chilling, but humorous orientation to the helicopter which left us all excited to fly and mindful of the strict safety protocol and structure we would follow. As it turned out, our whole group got to fly and we were grateful to be together. There were five groups of skiers (25 altogether) plus five guides flying this day; each group getting dropped in to a high mountain peak to ski down one group at a time to a lower landing zone in the vast high mountains. We were lucky to be in the second group of skiers with the most experienced guide, “Speed.”  The guide sat in the front of the aircraft with the pilot and five of us squeezed into the passenger compartment. It was me and four good-sized guys, so I was jammed in the middle and it was a delicate act to squeeze us in and get strapped.

My heart was beating as loud as the rotors when we took off; as we arced over the ski resort, I resisted the temptation to thumb my nose at the regular in-bounds skiers below. The view of the mountains was dramatic, much like the Swiss Alps; we wound our way high up and far into the mountain wilderness.

We flew to a small landing zone high above tree line; within a couple minutes, the bird took off and our group was left huddled at the base of the ragged peaks, ready for our first run.

Eagerly, we strapped on our skis, listened to the guide’s instructions and headed off into the snowy abyss. The snow conditions were phenomenal. Our guide said it was the best day of the year so far and we were like giddy kids as we whooped and hollered our way down the mountain. Twelve plus inches of new snow and not a breath of wind. The snow was deep and as light as, well, powder, giving us face shots at times. The terrain was varied but mostly mellow—they were keeping us off the steeper pitches due to high avalanche danger. That worked great for me—I have no desire to be in an avalanche or ski the steepest terrain in the San Juans. Moderation in all things, I say.

I am not sure what was more exciting, the helicopter swooping and diving into high mountain valleys, the dramatic jagged peaks of the San Juan mountains, the incredible snow conditions, the feeling of adventure you can only get from being high up in the remote mountain wilderness or having such a fun adventure with my husband and brother. After a brief wait (rest) between runs, each group loaded back into the bird to be ferried up for another run. We got six runs down (a perfect day), then rode in a van back to the resort in time for an elegant après ski at the landmark hotel in the village. That night we hit the town and toasted our accomplishments, laughed, slapped each other on the back and agreed that the trip was absolutely perfect.

Driving home the next day, back to the real world and our real lives, we had satisfied grins. It was definitively a trip to remember, made all the more memorable by the photos and video taken by my brother, a few of which are posted here. Memories to last a lifetime!

Get a Handle on Your Reins

Too Hot to Trot