I was glad to see you are doing a clinic in my area in NH. I have a 10 year old who was born on my farm who from day one has been an ADD/spooky horse. He has been a challenge and although we have made progress, I’m always back to square one. I have done so much with him, my background is in dressage, but I do a lot of ground work, some round pen, longeing, I take him places, clinics and shows now and then, but I still struggle with getting his attention. Is it possible that he doesn’t like ring work, he does like trail riding with his buddies, but is still spooky and inattentive most days, once in a while he’s kind of relaxed. Progress is very slow. He knows all the Pat Parelli ground exercises etc. But I can’t get beyond the inattentiveness to really start being able to school him. Any suggestions?

It sounds like you have already tried a lot of different things with this horse with some success, but the progress has been slow. At 10 y/o he ought to be getting pretty mature and reliable especially with all the work you have done. I would like to have an opportunity to see your horse and work with him a little, but in lieu of that, here are a few things I might try with a horse like this.

I like to teach spooky horses to face their fear and as long as they face it they can stop and relax, with lots of reassurance from me. So the first cardinal rule is that when the horse stops and faces when he is afraid (instead of spin and bolt) he gets a reward. He gets a rub on the neck and gets to stop and relax. Then I will gently encourage him to move toward whatever he is afraid of; I ask him to move forward one step at a time, stopping him with each step (so that I remain in control, issuing the orders) and rewarding him. This eventually becomes a game to the horse and he loves to work for the reward. He gets the ultimate reward when he will actually walk all the way up to the scary object and reach out and touch it with his nose. You can practice this on the ground too.

One big problem with a horse like this is that they do not focus on you and do not look to you for leadership. This kind of relationship (focused and obedient) is best accomplished with groundwork, both lead line and round pen. It sounds like you have done a lot of this already, but in my experience, I have seen a lot of people do the ground work but without succeeding in getting the horse’s total focus. For instance, the horse may run well around the round pen and do turns and stops, etc., but if his total focus is not on you almost all the time, then the round pen work may have been meaningless chasing of the horse.

Once the horse is moving away from me well in the round pen and I can control which direction he goes, then I want to establish a line of communication with him so that he is constantly looking to me for directives. If his focus wanders outside the round pen, then I put him to work. Not harshly and not chasing him but asking him to do something like go faster, go slower, turn this way, turn that way, etc. When his focus is on me because he has to see what I am going to ask him to do next, I let him stop and relax. This same concept can be applied for lead line work and mounted work. Just be careful that when you ask the horse for more focus, that you are not getting fast and reactive to him and escalating his tension but just quietly issuing directives to the horse and reinforcing what you ask of him. It is very important that you have and keep control of the horse’s nose, both on the ground and especially in the saddle. Most people let their horse’s nose wander all over the place and look at whatever interests them. This is a root cause of many behavioral and obedience problems. Usually, the very first indication that a horse is thinking about doing something he shouldn’t is when the nose leaves its position from in front of his chest. We work very hard with our colts and any older horses that come for training with behavior problems to teach this very, very important rule, “Thou shalt keep your nose directly in front of your chest at all times that I am working around you or riding you.” If you set this very simple rule with your horse and then enforce it 100% of the time, within minutes, your horse will become obedient.

I think it is important to master this rule on the ground first, but I also work on it riding from the get go. From the ground, all you have to do is ask the horse to stand (that is another very important ground rule we set right away, “Thou shalt not move thy feet unless I tell you to move them.”) and then step back away from the horse. He should stand there on his own volition, not because you have a choke hold on the halter rope. Correct his nose with a gentle bump of the halter rope every time he moves his nose away from you and point at his nose or twirl the tail of the rope toward his nose every time he moves the nose toward you. Just put his nose back where you told it to stay every time it moves; be slow and calm with your corrections but always consistent and firm when necessary. If he moves his feet when you correct his nose, put him back where he was and tell him whoa (standing still is another rule that must be reinforced in the same way). Work on nose control standing in an open area for 5-10 minutes and the horse will learn his parameters. Then I want to reinforce this rule at the hitching rail and at all times I am working around the horse.

When a horse moves his nose toward you, unasked, that is an invasion of your space and an indication that the horse does not respect your space (often because he has been hand fed treats and this has caused major disrespect, see the article on my website called “Trick or Treat”). So when he moves his nose toward me that is a greater infraction than moving the nose away. Depending on the horse, that might get a harsher correction from me, especially if it is a horse that has proven his lack of respect by walking all over me or ignoring me or even being aggressive.

Carrying over this rule (nose control) to the saddle is very important for a spooky horse. When he learns to obey this rule he will not really be able to spook and his focus will remain on you. He can pick his head up and look at anything he wants to, as long as his nose stays in front of his chest. If it moves to either side, I will correct it with a gentle and slow bump of one rein (if he is turning his nose to the right, use the left rein and visa versa). Again, it is not a pull or a jerk, but a slow gentle bump up on the rein and I will keep bumping (not pulling) until the nose comes back to center. If you set this rule and then enforce it, in short order the horse will learn to keep his nose centered. He may still make the occasional mistake and you will have to correct him consistently for some time.

One common scenario I see in horses like this is a co-dependent relationship with the rider. It goes something like this: the horse is spooky or fractious and the rider gets uptight and since horses reflect our own emotions, the tension escalates on both sides. Then the riders, knowing the horse is going to do it again, keeps a tense and tight hold on the reins and begins to look for the next spooky object, telegraphing to the horse that “I don’t trust you and there must be something out there to be afraid of.” Again, horses reflect our emotions so the horse becomes more tense and irritated from the rein pressure, causing an escalation in the rider’s tension that leads to irritation and anger in the rider. So now the rider is getting mad and frustrated at the horse and jerking and hitting, instead of calm and consistent correction, and the horse, again reflecting our emotions, gets frustrated and mad too. This is a terrible dynamic that can go on for days, weeks, months or years but at some point, either the horse or the rider will reach the boiling-over point and a major problem may ensue.

This negative dynamic must be stopped at some point, the sooner the better. When a rider is resentful, angry or emotional toward the horse, the horse is typically reflecting those same emotions right back at the rider and this is a terrible dynamic that has little chance for success. At this point, it is important to look for a way to change the dynamic and do something different. Often, the rider needs to take a deep breath, summon up some patience and most importantly, relax and SLOW DOWN your corrections and communications to the horse. Hopefully you and your horse have not yet fallen into this trap and some of these things may help you break the dynamic. To me, if I can teach the horse to respond to some basic rules and he can trust that I will enforce the rules, his life becomes more predictable and safe and he will relax and know that as long as he follows the rules everything is good and his focus will be on me as his leader. Good luck with this horse and I hope I get the opportunity to work with you both in person sometime. 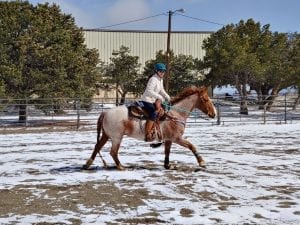 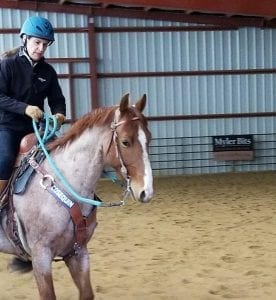 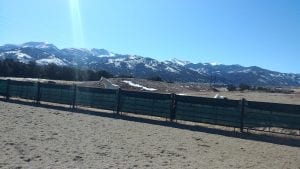