We have two ways to shop! 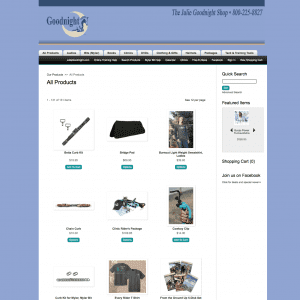 Online Downloads:
Shop for online downloads (watch or listen to any video and audio NOW)>> 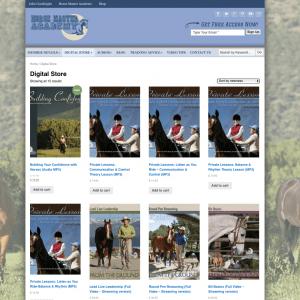 The question I have is for the Mountain Pleasure horse I bought about six months ago. He is a big sweetie, I love him dearly he has very nice manners and lunges well. The problem I’m having is the first time I rode him before I bought him, the people I bought him from used a headstall that was to big and he got the bit under his tongue I don’t know and can’t find out if he did this before then, but now it continues to be a problem. It seems if we are out on the trail and taking a rest is the time when he starts he can also get it back over his tongue. I have pulled the bit up higher and loosened the curb chain, he has 2 wrinkles with this. He did get spooked by some racing quads the other day and he did this and I still had control all the way home. Even turning him back around and heading away from the barn again.

Thank you for your help.
Dena

The problem of a horse putting the tongue over the bit is a big one and it is a difficult habit to break. A horse that is uncomfortable with the bit is generally trying to get the pressure off of his tongue. Since his tongue fills up his entire mouth when he is relaxed and has his mouth shut (as does ours), any time you put a bit in the horse’s mouth, it puts pressure on his tongue—some bits more than others.

In fact, the evasion tactics horses use to get away from bit pressure (throwing the head, rooting the reins, getting behind the bit, opening the mouth, sucking his tongue up in his throat, sticking the tongue out and putting it over the bit) are all in an effort to release pressure from the tongue.

All of these antics give him a momentary release (reward) and unfortunately, with the behaviors of putting his tongue over the bit and sticking his tongue out, he not only gets a release of pressure from his tongue, but he also gets an endorphin release (the natural opiates in our body) and so he essentially gets rewarded twice. Because the endorphins make him feel good, this becomes addictive and habitual behavior.

When the horse gets his tongue over the bit, it causes major problems. For one thing, he will open his mouth and hollow out (raise his head and invert his top-line), usually speeding up in the process. But the biggest problem is that once his tongue is over the bit, you no longer have much control. If you pull on the reins, it is so uncomfortable for your horse that he throws his head up and runs through the pressure.

The ideal scenario is to never let this habit develop in the first place. When bridling a young horse for the very first time, it is a very critical juncture—because in his efforts to spit out the bit he may get his tongue over it and if so, it may become a bad habit that he has the rest of his life. For this reason, when bridling a horse for the first time, it is very important to keep the bit quite high in his mouth. As he becomes more comfortable with the bit and less mouthy, you can begin to drop it down in his mouth. All of this information is covered in detail in my video called “Bit Basics,” as well as a systematic process for training the young horse or an older horse with problems how to respond correctly to bit pressure.

If a horse already has the bad habit of putting his tongue over the bit, the first thing to do is to see if we can make him more comfortable in the mouth. First, you must rule out a physical or medical problem; you’ll need to have your horse’s mouth examined by a veterinarian or equine dentist to determine if he has any dental issues or scarring in his mouth that may cause pain. Once a physical problem has been ruled out, you can look at changing bits to see if that might make the horse more comfortable. It could well be that the bit you are using now is contributing to the problem.

The average bit is made with the mouthpiece straight across from side to side, although no horses have a mouth shaped that way. The traditional snaffle and curb, no matter what type of mouthpiece it has (jointed, solid, ported), is straight across from side piece to side piece. This puts all the pressure on his tongue, where he is least able to tolerate pressure, even when you are not pulling on his mouth.

This is the primary reason I use only Myler bits—because they are all made with an ergonomic shape. They have a curvature that matches the shape of the horse’s mouth and they are all built to relieve tongue pressure. The Myler bits are classified by levels—one through three—and as you go up in level, you also get greater tongue relief. The bit I use on my horse is the “43 mouthpiece” and it has the maximum amount of tongue relief. This is the bit I would probably use on your horse to see if we could make him more comfortable in his mouth.

Since your horse’s habit is already engrained, it may be difficult to break, even if you make him more comfortable. Since he is basically getting a buzz off the endorphin release he is getting when he puts his tongue over the bit, it becomes addictive behavior. I’d keep the bit fairly high in his mouth to make it hard for him to get the tongue over; if he’s more comfortable with the new bit and you keep it high enough that he cannot get it over, it may dissuade him from the behavior.

If that doesn’t stop the behavior, you may have to add a tongue port. This is a small rubber thing that’ll only cost you about $2 and it looks sort of like a pacifier. It is about 3” long and has a loop at one end and a flat thumb-shaped flap at the other end. You loop it onto the center of the mouthpiece of the bit and the flap lays on top of the horse’s tongue and makes it so he can no longer get his tongue over, because he cannot reach his tongue up that high in his mouth.

If your horse slips his tongue over and back, it may not be a huge problem, especially if you feel like you have plenty of control. For serious problems, or when a horse has scarring on his tongue that means he may never be comfortable with a bit in his mouth, you could use a side-pull, hackamore or bitless bridle and probably have adequate control.

Firstly, let me tell you that I appreciate very much your website and information! Thank you!

My question is: I have a 3 yr old gelding Welsh Cob, just under saddle and I am trying to find the way how to ask him to loosen in the movement. It is ok for him to loose when we are standing (asking to turn the head to me and then he puts it down) but I have no clue how to proceed in movement. I either can’t keep him moving or he keeps moving but I can’t find any reaction for the head to go down. Do you have any suggestion for us? Thanks 🙂

Best regards from the heart of Europe
Karola (Prague)

Thanks for visiting my website and it is good to know I have followers from so far away! You’ll be happy to know that my TV show, Horse Master, is playing in a few countries in Europe now, so maybe it will be available in Prague soon!
I am assuming that what you mean by getting your horse loose, is to have him break at the poll and round his neck and back, while staying soft and relaxed throughout his body, so that his movement is rhythmic and fluid; with a rounded frame, rather than arched and stiff through the top-line. It sounds like you are able to ask your horse to flex laterally (side to side) and vertically (drop his head down as chin comes in and face comes to vertical) when you are standing still, but not while moving.
First, it is important to understand that for young horses that do not have much training, forward movement is the most critical thing to focus on. Breaking at the poll and rounding through the body (collection) come later as the horse develops physically and mentally. The horse’s conformation and natural carriage also play a big role in how easy it is to round his frame and carry himself and the rider this way. Usually Welsh cobs are built well enough in the front end for collection, with a rounded neck and an upright head carriage.
Focus first on just getting good forward, fluid movement from your horse without asking him to give to bit pressure and flex vertically. Then you can start asking him to gradually round his frame just a little at a time. Continue to work on lateral and vertical flexion standing still, then at the walk, then at the trot. If your horse is having trouble keeping his forward impulsion when you are asking him to round, you may be asking for too much too fast and may need to go back to basic training with a focus on forward movement. Make sure he learns to carry himself in the rounded frame and does not become reliant on you holding him up with the reins.
There are several articles in my training library that can help you with your youngster and I have two videos that could help. One is volume 5 in my riding series called “Refinement and Collection.” It elaborates on the mechanics of collection and how to use your aids to ask for it (as well as for lateral movements like leg yield and side pass). Also, my video called “Bit Basics” explains the process of teaching a horse to relax, drop his head and round his frame in response to bit pressure.

I hope this helps! Good luck with your gelding.