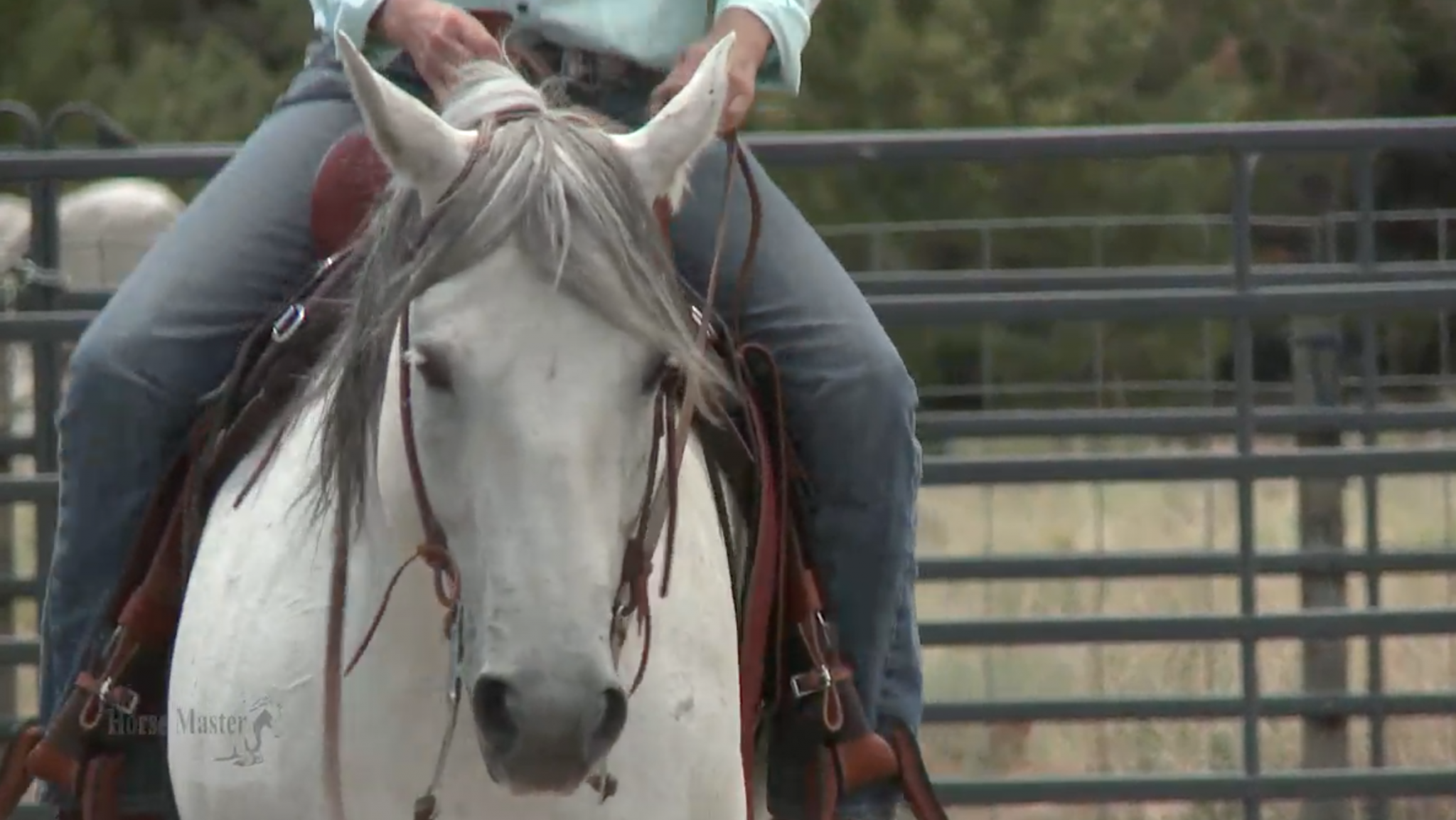 Is your horse easy to get along with, until you ask him to do something new and different? Or, heaven forbid, something he doesn’t want to do? Perhaps he’s happy to go down the trail in the company of others, but not alone. Or maybe he’ll go anywhere you point him, alone or with company, as long as you don’t ask him to cross water. How about the horse that half-heartedly trots when you ask, but threatens to buck if you ask to canter?
Horses are living, breathing animals with a mind of their own. They form opinions and make decisions.

Unfortunately, sometimes they come to conclusions we don’t agree with and form opinions that don’t jive with our wants and needs. For instance, if you’ve ridden a horse for two years and never once asked him to canter, your horse might understandably think you will never ask him to canter, or cantering is wrong or that it is not part of his contract. You can’t blame a guy for thinking, right?

The process of training horses involves both helping your horse form the correct opinions about being ridden and handled and not letting him get the wrong ideas. It takes months and years to train horses to a high level of performance and many mistakes can be made along the way that would lead your horse to misconceptions about what’s right and wrong. All it takes is releasing the pressure at the wrong moment, to convince a horse that was the right thing to do.

Although horses are not good at problem solving, they are always thinking and learning—whether we want them to or not—learning wrong things just as quickly as the right stuff. It’s funny that humans have literally three times the brain of a horse and much more capability in problem solving, yet we get outsmarted by horses all the time.

Huge pitfalls in a horse’s training can be avoided when the rider becomes more aware of the motivation behind the horse’s behavior, by making sure your horse forms the correct opinions about being ridden, by being mindful of the unspoken agreements between you and your horse and knowing who the decision maker is, in your “herd of two.”

Rather than simply react to your horse’s behavior, take a moment to assess his motivation. Once you understand why your horse is acting that way and what he is trying to achieve, you can address the behavior more effectively and make sure you don’t inadvertently reward the wrong behavior.

Opinions Count
You have opinions and so does your horse. It would be nice to think our opinions always align, but they don’t. For instance, you may think that you have not asked the horse to canter in over a year because you don’t want to canter and are not ready to canter. Your horse may come to believe that if he hasn’t been asked to canter in that long, he will never be asked. Furthermore, he may come to believe that it is not part of his contract—that you don’t have the right to ask him to canter.

Recently, I became aware that my young horse, Pepperoni, had formed an opinion that differed from mine. After riding indoors all winter, in the company of his herd mates, he mistakenly formed the opinion that he would never have to work alone. This became quite obvious when I took him to the outdoor arena alone and he threw a wall-eyed red-headed fit. My bad. I should’ve been working him in isolation more.

He had inadvertently formed the wrong opinion about how things work and he thought he was entitled to always ride in the company of other horses. We worked through this problem and I changed his way of thinking over a few weeks, and now I make sure I ride him alone regularly. Sometimes you and your horse will have differing opinions. It’s up to you, the leader, to clarify and rectify and make sure your horse comes out of every training session with the correct opinions.

Breach of Contract
In the training of a horse, we constantly make unspoken agreements with him. When you do as I ask, I will acknowledge and praise your obedience. When you try hard, I will let you rest. When you give the correct response, I will always release the pressure. When you resist or disobey my requests, I will always follow through with reinforcement.

Sometimes we make mistakes and fall down on our end of the agreement. Maybe at the moment you asked your horse to canter, you froze up on the reins and caused him to hit the bit and hurt his mouth. As far as he is concerned, this is an egregious breach of contract—you failed him. His head shaking and crow-hopping is his way of telling you that he thinks what you did is wrong. A smart rider will admit her mistakes and not blame the horse.

On the other hand, if you’ve been avoiding doing something with your horse because you are afraid to try or because you don’t think you can get your horse to do it, he may have come to believe that it is not part of his contract—that he will never have to do that. We can easily end up with a horse that does most of what we ask, but draws a line in the sand and says, “But I won’t give you any more than that—if you don’t push me, I won’t push back on you.”

I often see riders and horses that have this kind of arrangement—the “don’t push me too far” scenario. If there are things that you avoid asking your horse to do because you are afraid of his reaction when you do ask, your horse probably knows it and has come to believe that you’ve crossed a line when you ask that of him. In many instances, this kind of agreement seems to work, as long as the rider knows her place. But gradually, the horse will start making more and more deals under the table and is willing to do less and less.

You have a contract with your horse—to release the pressure when you should, to reward his good behavior, to not make mistakes and penalize him for doing his job, to be a good leader and make good decisions. Just make sure you have not inadvertently led your horse to believe that there are clauses in the contract which you have not agreed to. If there are things you avoid doing or if your horse has refused your request and you did not follow through, you may have taught him that he will never have to do that.

If your horse cannot trust your judgment (because you’ve made too many mistakes or betrayed his trust or been passive when you should’ve acted), he will constantly question your decisions. He may refuse to do what you ask or have a better suggestion for what you should do. If you make a poor decision that results in him getting hurt or scared, he has good reason not to trust your judgment anymore.

To be a good leader to your horse, you must not only make all the decisions but also make good decisions. It’s not just about you. Your responsibility is to take care of your horse—to be fair, consistent, and have good follow-through. It’s easy to blame things on the horse, but a good leader looks within for answers to problems.

At the end of the day, there’s only one conversation I want to have with my horse, and it starts like this… “Horse, this is your Captain speaking.” I like to think of myself as the Captain and my horse is my best first mate. I make the decisions and he makes it happen. He doesn’t argue with me or suggest I do things differently. He trusts me to make good decisions and he knows I won’t ask for more than he’s capable of giving me. He knows he will always be praised and rewarded for a job well done, and he also knows that if he falls down on his end of the agreement, he will hear about it from me.

Horses are quite clever, and they have a knack for reading people, sometimes better than people are reading themselves. Don’t be lured into thinking your horse doesn’t notice your actions, your lack-of-action or your avoidance behavior. Be honest with yourself and accept responsibility for your own mistakes. Think through your horse’s behavior, motivations and opinions and address them openly. Horses crave strong leadership and they know it when they see it, so look within and be the best leader you can be for your horse.