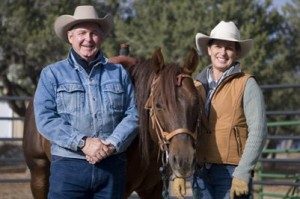 I’ve been having too much fun this week taking a private bitting clinic from Dale Myler, of Myler Bits USA. Dale was kind enough to come and give us his undivided attention for a couple of days to impart a lifetime of information on bits and bit design. I invited a several friends—all riders and/or trainers and over the course of two days, we worked with 15 different horses. Everything from an unbroke three year old who never had a bit in his mouth to Rich’s finished bridle horse—with a big variety of training levels in-between .

It was the most fun with horses I’ve had in a while and I don’t have enough time today to write all the things I learned (hence the fun). I fell in love with Myler bits years ago when they first came out and gradually through the years, they became the only bits to hang on bridles in my tack room. I knew intuitively why I liked them, knowing from the beginning that they had an ergonomic shape and must be more comfortable in the horse’s mouth. Although I was the only one in our group that had much experience with Myler bits, we all figured out right away, from Dale’s power point presentation, why the bits would work. It wasn’t until we were in the arena trading horses and bridles like crazy, that we could see the results first-hand. 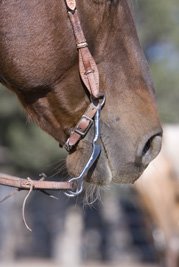 What I got the most from the clinic, was learning why I love the Myler bits so much. First off, looking at a dental picture with the horse’s teeth closed but lips opened by a speculum, you can see that the tongue fills the entire mouth when his teeth are shut—just like yours does. Having your tongue up in your palate is normal and feels good. It is not possible to put a bit in a horse’s mouth without it being pressed into the palate by the tongue. Pressure on the tongue does not feel good and if you don’t believe it, try poking your finger into your tongue.

Everything a horse can do to evade bit pressure has to do with him looking for relief from tongue pressure—whether he throws his head up, roots the reins, gapes at the mouth, sucks his tongue up in his throat, puts his tongue over the bit, comes behind the vertical. He’d rather have pressure anywhere than the tongue and by going through these gyrations, he always finds tongue relief. Even the bars of his mouth can take a lot more pressure than the tongue (try pressing on your bars—behind your molars and you’ll see what I mean). Myler bits are designed to relieve tongue pressure and distribute the pressure to other areas (like the nose, chin, poll, bars) in order to make the horse more comfortable and relaxed so that he is trainable and can perform to his fullest.

Here’s another interesting thing Dale said, a rider will never learn to have quiet and soft hands until she rides a soft and relaxed horse. That makes so much sense. If your pulling and struggling and hanging on for dear life, where’s the feel comes from? What I learned was that sometimes we can bit a horse differently so that he can tolerate the rider’s uneducated or inarticulate hands. Because I sell a lot of finished horses to novice riders, I already knew this and it’s one reason why I always send the horses to their new home with the right bit. 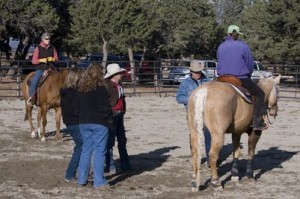 What was fun about the clinic was switching bits on horses and seeing instant results. I was pleased to learn that the bit I was already using on my horse Dually was probably the best thing for him but I realized I can get the same mouth piece in a snaffle side piece when I want to do more schooling on him. Rich had bought a Myler hand crafted reined cowhorse bit for his new horse a few months ago and Dale felt it was the ideal bit for him for show and we tried a few different bits on him for home-use. It was really interesting to feel the different bits on a very finished horse—a small change in the bit would be very noticeable in how Diggs responded and we settled on the same bit that I use on Dually for Diggs. 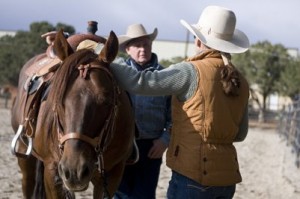 A lot of people these days seem to be asking, “why use a bit at all?” While many, if not most broke horses will work okay in a halter, a bit can provide the communication and precise cues that will help you achieve great performances. When used improperly, the devices can be treacherous, but with education and proper, kind use, a bit can help you better your communication and control. There are many things that compel us to use bits: more control, subtle communication, training to a high level of performance or maybe because the rules for your discipline compel you. What about you? What do you think about riding in a halter only or riding bridleless and without a bit? And are you happy, or more importantly, is your horse happy with the bit you use? Every time I’ve given a presentation on bits, the room has been full of people with lots of questions. I find it’s important to ask horse owners a few questions, too: How and what have you learned about bits? Why are you using the bit you use? If you have reasons beyond “that’s what someone told you to use,” do the reasons make sense? It’s a big subject! Post your thoughts here!

bit that came with the horse bits myler shank

Question:
Dear Julie,
I am currently schooling and riding in a D-ring snaffle bit. I want to start training for Western Pleasure. What kind of shank bit do you recommend for the transition?
Thanks,
Kim

Answer:
In most rule books, horses six years old and up are required to show Western in a curb bit. Horses five and under can be ridden two-handed in a snaffle. As the horse advances in his training and you are doing more advanced stuff, your horse will probably work better in the curb, provided you find the right bit for him.

First, it is important to understand the difference between curbs and snaffles; many people have misconceptions about this. It has nothing to do with the mouthpiece—being jointed doesn’t make it a snaffle. A snaffle is a “direct pressure” bit, meaning the reins are attached directly opposite the mouthpiece and there is a direct, pound-for-pound pressure on the horse’s mouth from a pull on the reins. A snaffle could have a solid mouthpiece and a bit with a joint in the mouthpiece but shanks is not a snaffle—it is a curb bit. Just because it is a snaffle does not mean it is mild and a curb is not necessarily harsh; many curb bits are milder and more comfortable for the horse than snaffles.

A curb bit has a shank on each side which drops down below the mouthpiece and the reins are attached below; a curb strap (or chain) behind the chin creates leverage. It is the ratio between the top part of the shank (the “purchase”) and the bottom part that dictates the amount of leverage; a 1:2 ratio means that for every one pound of pull, the horse gets two pounds of pressure. In general, the curb bit can give you more braking ability. If it has a mild port (a rise in the mouthpiece) it may be more comfortable for your horse than a straight snaffle; the port gives a relief of pressure from the tongue.

You should always ride two-handed in a snaffle. With a curb bit, you may be able to ride one handed or two. If the curb bit is one solid piece, riding two-handed does not do any good because if you pick up on one rein, the whole bit moves. If the bit has articulation from side to side, like Myler bits do, you can ride two-handed when you need to and you are able to work off the sides of the horse’s mouth, giving you greater training ability.
Most likely the bit I would recommend for your horse is the Myler MB04 with an HBT shank and a leather curb strap; it is an excellent bit to transition from snaffle to curb. The HBT shank is quite short and has very little leverage. The MB 04 mouthpiece has a small port which gives the horse a little relief of pressure for his tongue and is more comfortable for him than the D-ring snaffle you are using now.

Any time you change the bit on a horse, give him a little time to get used to the new feel in his mouth. Any different shape will be very noticeable for him, just like it would be for us, and he’ll need 15-20 minutes to get used to the new feel before you start doing anything with the reins. After that, you can start riding as you normally would, being aware that there is now a little leverage, so you may not need as much pressure from your hands.

Start out riding two-handed with a lightly loose rein as the horse gets used to the new bit. Practice keeping your hands closer and closer together and moving them as one; that’s how you’ll work up to riding one-handed. Even once you are riding one-handed, do not hesitate to go to two hands as needed to keep the horse correct (in the right frame and arc). Of course, in the show ring you’ll have to ride with one hand, but when training always keep the horse correct and use two hands as needed.

The Myler bits that I most frequently recommend to people are listed on this web page, along with an explanation of what type of horse I would use them on http://www.juliegoodngiht.com/myler Also, there’s a great new 4-part online free video series from Dale Myler that you can find a link to on the main page of my web site. He talks about his bits and explains the transitions well: http://juliegoodnight.com

Good luck with your horse and I hope your transition to a curb bit is easy!