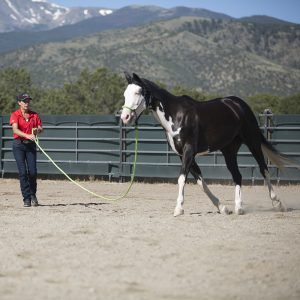 “Does my horse have a sense of fairness?” Recently, one of my Interactive Academy members asked me this question—a question that no one has ever asked me during my forty years of teaching people to ride horses. I’ve been working with this rider for a while now. She’s working through my 12-month curriculum with her horse to help improve her own horsemanship, as well as advance her horse’s training. Those endeavors involve improving your own leadership skills. Considering her leadership skills led to the question. So, does a horse have a sense of fairness?

Your horse’s point of view, on any given subject may be (and probably is) quite different than your own. What your horse views as unfair treatment may surprise you. But fairness does not exist in a vacuum—it is always relative to other factors. We get caught up in our own, singular point of view, and fail to consider all the factors. What seems perfectly reasonable to us, may be viewed as grossly unfair as another.

Leadership is not just about your actions or intentions; it is also about your honesty, integrity and fairness—including admitting your own mistakes and taking responsibility yourself if your followers fall short of your expectations. Authority is not the same as leadership—just because you have authority over others does not mean that they have a desire to follow you or accept you as their leader.

Horses most certainly have a sense of fairness, just as they are good judges of leadership and trustworthiness. Because they are herd animals, they are mindful of leadership, hierarchy, rules, and ramifications of behavior. They are instinctively drawn to strong leadership, with a compelling desire to be accepted in a herd and a profound fear of banishment from the herd. Horses thrive when leadership, rules and structure exist and they flail in the absence of it.

That’s not to say a horse never does anything wrong or that he would think any discipline was bad. He knows when he is breaking a rule or pushing a boundary and he usually responds well to fair punishment. But when rules are unclear or inconsistently enforced, when you say one thing but then do another, when you inadvertently punish even though no punishment was intended, or when the punishment does not fit the crime, a horse will feel that they are being treated unfairly, and his trust in you diminishes.

How would you know if you horse feels like you are treating him unfairly? This is what varies greatly with horses—given his natural temperament, he may react strongly or not at all to any perceived injustice. Reactions from the horse may range from a slight tensing and lifting of the head, to shaking the head, refusals, running through the bridle, crow-hopping, bucking, or shutting down (becoming nonresponsive). Of course, there could be many causes for these type of reactions in a horse, but whenever a horse is frustrated, it’s always important to consider your own actions, and how they may be viewed by the horse. After all, none of us is a perfect leader for our horses.

Ask him to do something then punish him for doing it: An easy way to test your horse’s sense of fairness is to cue him to canter, then hit him in the mouth with the bit when he does. How he reacts to that will tell you how tolerant he is. This happens far more often than you think, in all levels of riders. Sometimes it’s related to lack of skill; other times it is reactionary—a rider fearful of the canter often snatches the horse up as soon as they respond to the cue. From the horse’s point of view, you asked him to do something then you punished him for doing it. Responses from this kind of conflicting signal can range from a small shake of the head, to crow-hopping, to a refusal to canter for you anymore, to flat-out bucking. But usually it is the horse that is blamed; not fair, nor is it honest, from your horse’s point of view.

Asking for one more time: Let’s say you’ve been working on something very challenging for your horse—like jumping gymnastics. Maybe you start with just a few rails up in the line of jump-very-stride obstacles and gradually you add more until it is a very challenging and strenuous exercise. After some stops and starts and failed attempts, your horse finally goes through the full gymnastic correctly. You are thrilled! So what’s the first thing you say? “Let’s do that one more time.” You know what happens next. He’s already given you his best and that wasn’t good enough; now he’s tired and emotionally spent and you ask for more. Things fall apart and what should have been a great training session turns into a salvage effort. Fairness would dictate that you recognized your horse’s best effort and let him rest on that, rather than feed your own greed.

Setting the horse up for failure: This is the actually the real, unedited scenario that stimulated the whole discussion on fairness between my Interactive member and myself. “The last time we went to the arena, there were about 15 of us in there at once – usually, I have the place to myself, or maybe one other rider. This was a big test I thought – thinking about how anxious he was on the first day of the clinic [she’s referring to a clinic she took with me, 6-8 months ago, when he had come uncorked]. He did great! He stayed focused and listening to me. The only negative was when we were done, I loaded him up – no problem. So I decided to practice unloading and loading since we were a little tired and away from home. He decided no. A nearby rider gave me some help. This made me think about fairness. Was it unfair to finish and then ask for more?”

Yes, it was unfair. Clearly the horse had given of himself, worked very hard and done the right thing. He had every reason to believe he was done and would receive the kindness of comfort from his leader that he had a right to expect after a job well-done. Instead, he was set up to fail; he was set up to rebel. After all, he had already loaded once without resistance. Was that not what you wanted? Authority should not be exploited. My father often said, “A well-trained horse that trusts you, will jump over a cliff if you ask. But that might be the last time he trusts you and it might be the last time you get to ask.”

Does an impatient horse need to learn more patience? Yes. Should we expect perfect patience of him in every situation or at the same level we do another more patient or more experienced horse? No. Should we make him jump through hoops when he is most anxious or most aggravated, just for the sake of seeing him jump through the hoops? No. Should we ALWAYS set him up for success? YES! A good training exercise sets the horse up for the greatest chance of success, not throwing challenges at him one after the other with the intent of making him fail.

A good leader does not expect his followers to do things beyond their capabilities. Yes, you want to push your followers to be the best they can be, but you cannot make them be something they are not or live up to an unattainable expectation. Everyone wants the feeling of a job well done. If we think our horse may not be capable of giving us what we want in that moment, it’s best not to ask. Do something else instead. Come back later and address it when the chances of success are greater or when you have removed other obstacles.

While your expectations should be high, you are not trying to find your horse at fault and it is not about you, but more about what your horse is capable of giving. It’s about asking him to try and then recognizing his try, even when it is not perfect. Every horse is different and what may seem like an awesome response from one horse may be nothing for another horse.

Join the academy and get my one-on-one feedback as you work with your horse: HorseTrainingHelp.com

Have a good ride,

A Horse’s Sense of Fairness Unfair