Q: Why do some horses feel threatened when it comes to their food, and in return behave in an aggressive way at meal times? What can I do to prevent food-time aggression and stay safe at feeding time? –Chloe Martin

A: A horse’s aggression at feed time may be as major as pinning his ears, baring his teeth and charging you or as minor as grabbing the hay out of your arms when you arrive to distribute dinner. Horses may behave this way to establish who’s dominant in the herd—and if you are present with food, you’re part of the herd for the moment! When horses establish who’s in charge in the herd, they show they are dominant by controlling space and controlling resources. The resources are food, water and shelter. With food aggression, the horse is often simultaneously invading your space and taking away the food. That’s his way to control space and resources all at once. Keep in mind that he doesn’t know the difference between horse food and people food—he doesn’t know you won’t eat it. He knows he wants it and he can take it from you.

Why does your horse think he’s dominant over you? Hand feeding treats can lead to the horse thinking he is in charge and allowed to take food from your hand. He also learns that by pushing into you he can control where you stand and where you’ll go. Sometimes horses develop food aggression just because their dominant behavior has been tolerated in the past; it becomes worse over time. Sometimes aggression develops when feeders don’t go into the pen with the horse at all. When horses are fed only twice a day (instead of eating all day long like nature intended) there is a lot of stress and anxiety over when the next meals comes.

Some horses will be so anxious that they start acting out, like pawing, pinning the ears or baring teeth, then when the feeder dumps the hay in, the horse comes to believe his aggressive gestures are causing you to feed him. Even though you aren’t going into the pen so his gestures don’t concern you, to him it is as if he intimidated you into dropping the food and leaving, so his aggressive gestures were rewarded.

There is also herd stress if you’re feeding in a group and only feeding twice a day—horses may be worried about getting their food and also worried if another horse will allow them to eat. Those two factors—the herd and the limited food resource—may make the horses aggressive toward one another and just agitated to anyone present at feed time. That kind of stress in addition to only being fed twice a day causes a competition for the food. In that case, I would recommend separating them for feeding to reduce the competition for food. Or feed more often. Giving horses free access to hay 24 days, seven days a week will virtually eliminate all food aggression.

If a horse is acting out against you as you bring the food, that’s easy to fix. I would use a flag whenever I approach the horse’s pen, whether I intend to go into it or not. Wave the flag at the horse to back him up. Once he yields his space, he will then look forward at you to see what is going to happen next. While his ears are forward and after he has backed up, drop the food and walk away. If his aggressive antics don’t get him what he wants, he will stop acting that way. Make sure you have a flag or stick to make sure you can defend yourself.

Remember, he doesn’t have to act well for long—just has to be acting right at the moment you feed him. It’s not that the alpha horse never lets the other horses eat—they get to eat when she walks away from the food. 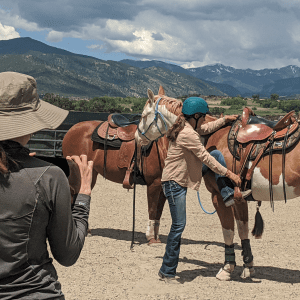 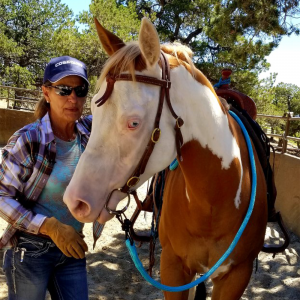 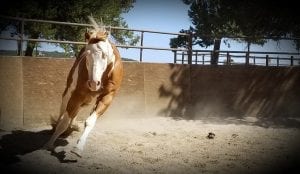